Why facing the voters is important for democracy 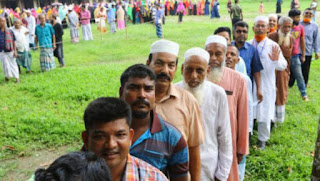 The year 2018 is one of elections. A total of five city corporation elections are to be held this year, of which elections in Khulna and Gazipur have already been held. Elections in Sylhet, Barisal and Rajshahi will take place on July 30. These local elections are important as they are likely to have an influence on the upcoming national election at the end of the year.
SHUJAN: Citizens for Good Governance has initiated important interventions, including arranging press conferences and using social media and cultural teams to carry out publicity campaigns. These campaigns are intended to remind the Election Commission, the government, including the bureaucracy and the law enforcement agencies, election officials, media and the civil society, of their obligations to hold free, fair and credible elections. The campaign is also designed to create voter awareness and motivate them to vote for clean candidates.


More importantly, we have created comparative statements based on the disclosures made by candidates in the affidavits and distributed them to the media and also the voters to help them make informed decisions. Incidentally, because of these relentless efforts, the voters have become aware of their right to know about the antecedents of candidates, including their education, profession, income, criminal records, tax payments, and assets and liabilities of themselves and their dependents.
One of the most significant election-related initiatives of SHUJAN has been to arrange “face-the-candidate forums,” allowing the candidates to share the reasons for their contesting the election and what they would do if elected. These innovative events also allowed the voters to directly face the candidates and ask them questions.
A unique feature of this forum is that it has allowed candidates to sign a declaration committing to free, fair and peaceful elections and to staying away from vote-buying and violence. Their commitments also included eradication of corruption and cronyism from the city corporations and facing the voters every year to account for their income and wealth. In addition, in these events, voters took a pledge to vote for clean candidates and promote peaceful elections.
SHUJAN has been arranging face-the candidate forums since 2005. During the ninth parliament elections, held in 2008, we arranged such events in 87 constituencies. Over the years, hundreds of thousands of voters participated in these events, contributing to participatory democracy in our country.
Similar innovative events have been held during recent city corporation elections as well as for ones that are going to be held soon. In recent local elections, we have also arranged similar programmes for ward councillors. Again, thousands of voters have been attending these events, which are giving them an opportunity to know more about their candidates and make informed decisions.
The present cycle of city corporation elections began in Narayanganj, held on December 22, 2016, followed by Rangpur elections on December 21, 2017. More recently, elections in Khulna and Gazipur were held on May 15 and June 26, 2018 respectively. There were face-the-candidate forums for mayoral candidates in all of those elections. Those elections were free, fair and credible, and the ruling party mayoral candidates, it must be noted, lost in both cities.
In recently held elections in Khulna and Gazipur, the ruling party candidates won (The Daily Star, July 17, 2018). In both elections, the winners participated in our face-the-candidate forums. However, after the successful implementation of the “Khulna model” of elections in both of those cities, we have observed a kind of reluctance on the part of mayoral candidates nominated by the ruling party to participate in these forums.
Face-the-candidate forums were arranged on July 11 in Sylhet, July 13 in Barisal and July 14 in Rajshahi. Despite our utmost efforts, the ruling party-nominated mayoral candidates of Barisal and Rajshahi did not participate in these events. However, although the ruling party mayoral candidate of Rajshahi expressed his regret the night before, he sent emissaries to the event to express apologies for his absence.
The voters at the face-the-candidate forums in Barisal and Rajshahi had lots of pointed questions regarding the absence of these major candidates. Many of them reacted quite strongly. Many voters wondered whether the ruling party did not need their votes and would win without them anyway. Some voters even raised the question whether they were afraid of facing the voters.
We were surprised by the reactions of the voters. The ruling Awami League is the party which provided leadership during our War of Liberation. They also came to power with a landslide victory in a free, fair and peaceful election in 2008. It is hard to believe that after ten years in power, they would be afraid to face the voters!
There are, however, valid reasons for many voters to be frustrated. During the present regime, we have made significant strides on the economic front. The trials of war crimes and Bangabandhu killing are practically over. Yet the commitments made in the “Dinbodoler Sanad”—the election manifesto announced by Awami League prior to the 2008 parliament elections—have remained largely unfulfilled. "Dinbodoler Sanad" included, among others, a commitment to “a truly participatory and tolerant democratic system where social justice, women's rights, equality of opportunity, rule of law, human rights, good governance and pollution-free environment will be ensured. A secular, progressive and liberal welfare state will be created in the process.” It also made a commitment to take effective measures against corruption and disparity. According to many observers, the losses suffered by the Awami League in all five city corporation elections in 2013 could be attributed to its failure to implement the "Dinbodoler Sanad".
In the election manifesto declared before the one-sided elections of 2014, Awami League made democracy, good governance and decentralisation its top priorities, which again it failed to implement. Thus, the discomfort of the ruling party candidates in facing the voters is understandable. More importantly, after perfecting the Khulna model of a controlled election in Gazipur, characterised by excesses of the law enforcement agencies and the inaction of the Election Commission, facing the voters will be even more difficult for the ruling party candidates.
Source: https://www.thedailystar.net/opinion/politics/why-facing-the-voters-important-democracy-1609852
Email ThisBlogThis!Share to TwitterShare to FacebookShare to Pinterest