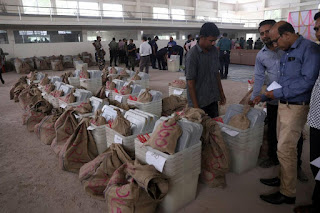 Judging from the May 15 election in Khulna, and the Gazipur city corporation election on June 26, five distinct features of a controlled election have emerged. It is clear that the so-called Khulna model of controlled election was used in Gazipur as well. In order to make our democratic system functional and meaningful, further use of this Khulna model must now be prevented.

So what is the Khulna model of controlled election? What are its basic features?

Broadly speaking, there are five essential features of the Khulna model:

First, making the leaders and workers of the main opposition party be on the run. This happened in Gazipur as well as in Khulna. For example, on May 6, the police arrested 13 people including the BNP's Vice President Abdullah Al-Noman from the surrounding areas of the home of the BNP candidate Hasanuddin Sarker for vandalising a laguna.
Noman was released after six hours. The next day, a case under the Special Powers Act was filed against 103 people, including those 12, of which 48 were members of BNP's election management team, although the laguna was later found undamaged in Tongi thana. In addition, BNP alleged that nine members of its election management team were arrested from the night of June 20, all of whom were apparently arrested under cases filed in adjoining districts. Such arrests, violating an earlier High Court order, clearly made the BNP activists be on the run.

Second, preventing BNP polling agents from performing their duties. Many BNP polling agents were prevented from reporting to the polling stations or they were forced to leave the stations. Some were picked up by law enforcement agencies and released after polling. Some were even found in Keraniganj central jail (Prothom Alo, June 28). Picking up over 100 BNP polling agents in Gazipur is unprecedented. In absence of agents, it is easier to commit many electoral offences, including ballot box stuffing, fake voting and inflating the vote count in absence of polling agents. For example, the EWG observers have found evidence of inflating the vote count in two centres in favour of a candidate in Gazipur.

Fourth, inaction of the EC. Like in Khulna, complaints were repeatedly made regarding the violation of electoral code of conduct, harassment of opposition activists by law enforcement agencies, which the EC largely ignored. Although law enforcers have been arresting BNP leaders and activists for quite some time, the EC issued a directive one day before the election in Gazipur not to arrest anyone without warrant, which amounted to doctor's showing up after a patient's death. The Commission also took no action against the SP of Gazipur despite repeated complaints against him of partisan behaviour, although even the previous Rakibuddin Commission ordered his transfer before another election. More importantly, no action was immediately taken against anyone for misconduct after the Khulna election. The City Corporation Election Rules, 2010 clearly states, “Any public servant who uses his official position to influence election results will be liable to be sentenced for a minimum of six month and a maximum of five years.”

Fifth, making mayors from the opposition party powerless. Like in Khulna, the last mayor of Gazipur, who belonged to BNP, was a victim of many cases, arrests, jailing and suspensions. These cities were also deprived of development funds from the government, as a result of which their voters were denied many services that they deserved and needed. The conditions of roads, sanitation and garbage management in Gazipur is particularly appalling. This left the voters of these two cities with no option but to vote for the ruling party candidate if they wanted development.

It is clear that the Khulna model could be used in Gazipur because of the indifference and inaction of the EC. The spirit of all our electoral laws is that the EC would be the supreme authority during elections. With that view in mind, for example, section 84 was added to the City Corporation Election Rules, which created the compulsion for the respective law enforcement agencies, government officials and all persons engaged in electoral duties to work under the direction of the commission. Unfortunately the reality has been very different, which was vividly apparent in both Khulna and Gazipur. If the commission succeeded in taking stern action against those committing electoral offences, the repetition of the Khulna model could largely have been avoided, paving the way for free and fair elections in Gazipur.

In closing, the ruling party enjoyed distinct advantages in Gazipur due to a lack of development there under the previous regime, vigorous campaigning of its youthful and rich nominee and all his past community development activities, which could perhaps ensure its victory. But all the excesses of its activists, law enforcement agencies and the EC's allowing those to go on unabated greatly marred this victory. I hope the commission will now rise up to its constitutional responsibility and do what is needed to ensure credible elections in Sylhet, Barisal and Rajshai, although there are already allegations of arrests in Sylhet and Rajshahi and focible withdrawal of some councilor candidates in Barisal.

Source: https://www.thedailystar.net/opinion/politics/five-features-controlled-election-1606330
Email ThisBlogThis!Share to TwitterShare to FacebookShare to Pinterest