Will the EC live up to its mandate? 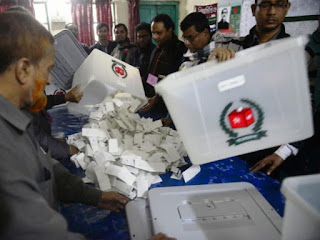 The Election Commission (EC) held a post-dialogue press briefing on October 26. At the briefing, the Chief Election Commissioner said that the commission must conduct elections in accordance with the laws made by the government. His statement, although significant, raises serious concerns.

A government is run by the representatives of political parties. In fact, political parties are created with the purpose of being voted to power, forming government, and then remaining in power, ideally to do public service. And this is the way it should be.
However, in a society where democratic values are absent, democratic institutions fragile, and civil society either weak or subservient to those in power, governments often remain at the helm by changing laws and rules to suit their narrow, party interests, and bending democratic institutions to that end. The demand for a neutral caretaker government, which was included in our Constitution, arose to remedy this problem.

The CEC's statement raises concerns because the EC's responsibility is not just to hold elections according to the government's design, but to ensure free and fair elections—elections that would consolidate and institutionalise democratic system. An essential precondition for institutionalising democracy, obviously, is to ensure free, fair and credible elections.

The EC has been created as an independent constitutional body to carry out election-related responsibilities. These responsibilities include ensuring that: (1) all eligible persons can become voters; (2) all potentially interested contestants can become candidates; (3) voters have credible choices before them; (4) voters can vote without fear or pressure and in a peaceful environment; (5) vote counts are reliable and free of manipulations; (6) electoral complaints and disputes are dealt with promptly and fairly; (7) money and muscle do not play any role in elections; and (8) the entire electoral process is credible.

Elections will be “genuine,” in the language of international laws, if such conditions are met.

The EC has been given wide inherent powers to hold genuine elections. Our Appellate Division, in Altaf Hussain vs. Abul Kashem [45DLR(AD) (1993)], stated that “the Election Commission's inherent power under the provisions of 'superintendence, control and direction' should be construed to mean the power to supplement the statutory rules with the sole purpose of ensuring free and fair elections.”

With the dialogue over, the ball is now in the EC's court. It is now the responsibility of its members to assess the recommendations received from the dialogue and elsewhere, and accept the ones that would be absolutely necessary for free and fair elections. The commission's next priority must be to implement those recommendations that are within its jurisdiction. The EC should then request the government to implement the ones that are accepted but outside its purview. Holding free and fair elections must be the only criteria for the acceptance of recommendations, not the EC's jurisdiction. If the EC is to accept only those recommendations that it can implement and reject the ones that are outside its jurisdiction, even though they are absolutely necessary for credible elections, then it would amount to holding elections according to the designs of the government. In that case, the EC would be acting as the puppet of the government.

The government may or may not accept the requests of the Commission, although it may be relatively easy for it to accept some of the potential requests. For example, if the commission requests the dissolution of the Parliament before elections to ensure a level-playing field, that will be very easy for the government to accept. Incidentally, in the observations of the 13th amendment judgment, Justice Khairul Huq recommended the dissolution of the Parliament 42 days before the election. It may be noted that currently the mayors and chairmen have to resign before local government elections.

If the government ignores the EC's requests, then it will have to determine whether, under the circumstances, it can conduct free and fair Parliament elections. If it feels it cannot do so, then members of the commission will have to decide whether to go ahead with the election or not. If not, the alternative before the EC members would be to step down, just as the Dr Huda Commission was about to resign before the Narayanganj City Corporation election in 2012.

It is clear that in 2014 the Rakibuddin Commission conducted a one-sided, controversial election, and in the process, failed to uphold its constitutional responsibilities and the interests of the people. That controversial election has created many daunting problems that we face today. If the present commission also fails to conduct the upcoming election in a free and fair manner, we may fall off the cliff, from which we may not be able to recover. We hope that all the stakeholders will show good sense and work towards holding a free, fair and credible parliamentary election.

Source: http://www.thedailystar.net/opinion/politics/will-the-ec-live-its-mandate-1496839
Email ThisBlogThis!Share to TwitterShare to FacebookShare to Pinterest