Gender-gap in electoral roll and some additional questions 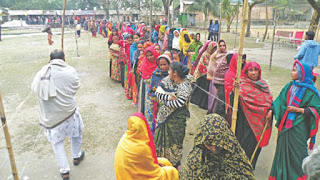 A credible electoral roll is a prerequisite for free and fair elections, and the allegation of 1.25 crore fake voters in our electoral roll was one of the reasons for not holding the ninth parliament elections on time. The matter eventually landed in the Supreme Court, and based on the Court's direction, an electoral roll with photographs was prepared in 2008 by the Election Commission, headed by Dr. ATM Shamsul Huda. The electoral roll thus prepared was audited by the International Foundation for Electoral Systems (IFES), which found it to be 99 percent accurate.

To fully realise the seriousness of the gender-gap in our latest electoral roll, one needs to disaggregate it to the district level. Unfortunately, the EC has not published the final electoral roll for each district, and the formal and informal efforts to receive the information from the Commission were unsuccessful. However, the draft supplementary list published by the EC on January 1 shows the number of new voters, both female and male, for each district, from which we can see the extent of the disaggregated gender-gap.
ADVERTISEMENT

Another problem with our electoral roll is that the observed gender-gap, especially among new voters is inconsistent with the prevailing sex ratio in our population. According to the 2011 census, Bangladesh's sex ratio is 100.3, that is, the number of men and women in our country is almost the same. Thus, there is no justification for the high gender-gap among our new voters.

In fact, the media has already raised serious questions about the accuracy of the revised electoral roll. For example, a report in Jugantor (January 26, 2015), stated that “the enumerators did not go to many houses. Some of them collected the information from influential persons and their acquaintances in the neighbourhood. Many aspiring voters of the capital city, districts and Upazilas did not see the enumerators. Many enumerators paid no attention to the legal requirement of their going from house to house for collecting information. In addition, there was not enough publicity about the revision of the electoral roll.” Incidentally, no enumerator visited this author's house during the revision.

To conclude, the EC is a constitutional body which has the responsibility of strengthening our democratic process by holding free and fair elections. To this end, Article 118 of our constitution assigns four specific responsibilities to the Commission, including the preparation of an electoral roll for parliament elections. The Commission has also been given almost unlimited powers to faithfully discharge its responsibilities. However, it is not only failing to do its job, it is also getting embroiled in one controversy after another because of its partisan actions. Controversies could not be avoided even in revision of the electoral roll, which is bound to be an issue in our next election. It is therefore imperative that a third-party audit of our electoral roll is initiated immediately to establish its accuracy so that necessary corrections can be made on time.

Published in The Daily Star, July 12, 2015
Email ThisBlogThis!Share to TwitterShare to FacebookShare to Pinterest